I hold a Ph.D. in Art History from Yale University. My research examines the art and material culture of the Spanish and Portuguese empires in the early modern period, with a focus on trade with Asia and the larger Indo-Pacific. I am interested in how transit affects artistic production and in the role of the so-called “decorative” and “popular” arts in globalization. My work has been supported by the Robert Lehman fellowship at Yale (2016) and the Andrew W. Mellon predoctoral fellowship at the Center for Advanced Studies (CASVA) in Washington D.C. (2018-2020).

Layovers: Export Art and the Transpacific

My project examines diverse objects crafted for export and transported within imperial trade networks of the Spanish and Portuguese empires from the sixteenth to the eighteenth centuries. I describe a category of “accretive artworks” composed of layers of influence, interpretation, and intervention, as well as the numerous agents and artists responsible for their modification at multiple points of encounter within and around the colonial Iberian Viceroyalties.  This invites consideration of diverse transpacific materials such as lacquer, shell, ivory, paint, and even textiles, that were all traded along Iberian maritime routes and among the Viceregal Port cities of Goa, Macao, Nagasaki, Manila, and Acapulco. The Indo-Pacific sphere will complement established Atlantic-oriented models of artistic transfer.

The act of material layering— that is, the piecing together and binding of disparate decorative elements —brings together the themes of “mobility” and “modification.” It also helps account for colonial makers and interlocutors who have been excluded or erased from the historical record.

I teach, write and sometimes curate medieval and early modern art and material and visual culture from the greater Mediterranean to Eurasia and the Indian Ocean. I am currently writing a book on art and material culture circulating in the Black Sea region during the Middle Ages. I am the co-founder (together with Caroline Fowler and Princeton University Press) of the book series Art/Work which is set to narrate a new history of art founded in the study of objects, materials, and technology. I also co-edit the journal W86th. My first book, The Bronze Object in the Middle Ages (2016) was awarded the International Center of Medieval Art Book Prize (2017). The catalog accompanying my exhibition, Agents of Faith: Votive Objects in Time and Place (2018) was chosen as one of the New York Time’s best art books (2018) and was Awarded the A+C Book Prize (2019). I was a doctoral fellow at the Kunsthistorisches Institut, MPGI, Florence (2008-2009); a member of the School for Historical Studies, Institute for Advanced Study, Princeton (2012); a Mellon Fellow at the Center for Advanced Study in the Visual Arts, National Gallery, Washington, DC (2019); and a John Simon Guggenheim Fellow (2019)

Art and Frontier carefully examines the place of art and material culture in frontier societies by concentrating on a complex moment in the history of European expansion in the Middle Ages when material consumption and production intensified dramatically. The study focuses on the geographical region of Crimea, a peninsula on the northern coast of the Black Sea, during a roughly two-hundred-year period of European exploration and colonization. Art and Frontier simultaneously examines how these processes developed in dialogue with conceptualizations of that very frontier in the minds of scholars and institutions in the heart of Europe. Through a focused look into how art and material culture worked to produce, define, and profess the actual and conceptual space of the frontier, I argue, a new understanding of the center can simultaneously arise. This bifocal look at the construction of a frontier—considering, on the one hand, the actuality of material and artistic production in the peripheral zone and, on the other, the intellectual conceptualization of that frontier in the center of Europe—will allow for new framings of art in the formation of medieval societies in places traditionally overlooked by art historians.

Carlos Rojas Cocoma holds a bachelor’s degree in Filmmaking Production from the Universidad Nacional de Colombia and in History from the Pontificia Universidad Javeriana.

He did his Master and Ph.D. in History at Los Andes University, Bogotá, Colombia. The title of his doctoral thesis is: “Visuality and Experience: the Images of the Orinoco River, 1741-1824”.

From 2006-2009 he worked as a chief curator at the Museo de Arte Colonial in Bogotá. In 2009 and 2010 he was finalist of the Premio Nacional de Crítica of the Ministry of Culture in Colombia. Between 2009-2013, he worked as seminar teacher at the Pontificia Universidad Javeriana and Los Andes University where he focused on the connections between history and Images. Since 2014 he is associate professor at the EAN University in Bogotá. 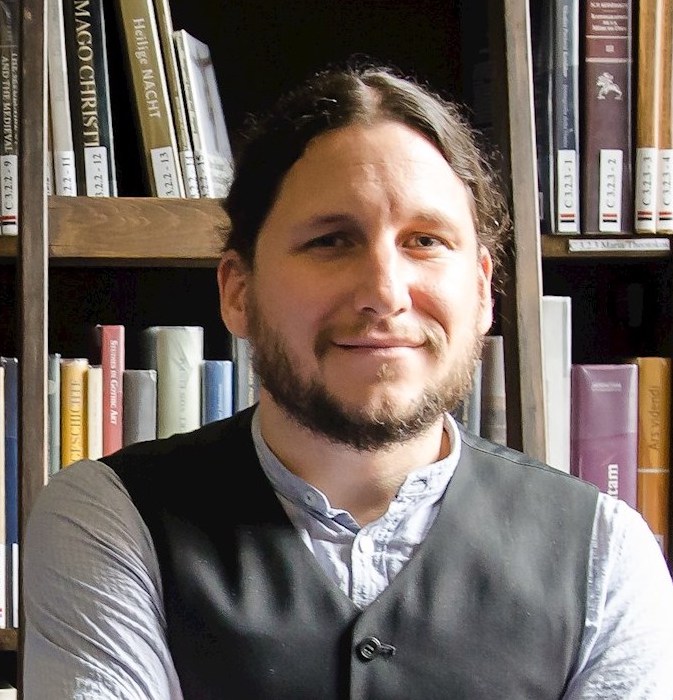 Ivan Foletti is currently Professor of Art History at the Masaryk University, Brno. He is the head of the Center for Early Medieval Studies, editor-in-chief of the journal Convivium and director of the Hans Belting Library. He taught as invited professor in Czech Republic, Finland, France, Italy and Switzerland and was also a fellow at the Swiss Institute in Rome, the Max-Planck-Institut für Kunstgeschichte, Bibliotheca Hertziana, the Zentrum für Literatur- und Kulturforschung in Berlin and the Deutsche Forum für Kunstgeschichte in Paris.

His collaboration with the project Global Horizons in Pre-Modern Art is a natural result of his passion for the investigation of medieval landscapes into the context of medieval pilgrimage, and the visual and material cultures of the Southern Caucasian region. With the team of Global Horizons, he is also sharing the engagement for a non-Eurocentric and non-colonial gaze on pre-modern cultures.

At present (2018-2023), Kristopher is a collaborator with Global Horizons in Pre-Modern Art, an international research initiative funded by a European Research Council Consolidator Grant through the University of Bern. Past fellowships include the Andrew W. Mellon Fellowship (predoctoral) at the Center for Advanced Study in the Visual Arts (CASVA) as well as the Anne van Biema Fellowship (postdoctoral) at the Freer Gallery of Art and Arthur M. Sackler Gallery (Smithsonian Institution).